History of Cr(VI) in Drinking Water

Current U.S. EPA regulations allow 100 parts per billion (ppb) total Cr in U.S. drinking water. This chromium drinking water standard is based on a study by MacKenzie et al. (1958) that observed no toxicity in laboratory rats exposed to up to 25,000 ppb chromium in the form of potassium chromate (K2CrO4) (U.S. EPA, 1985). Thus, 25,000 ppb was selected as a point of departure for risk assessment, which was equivalent to a dose of 2.5 mg/kg per day. The U.S. EPA divided this value by 900 to account for various uncertainties and derived a safe drinking water value of ~100 ppb chromium. As a result, chromium concentrations ≤100 ppb were thus considered safe for consumption. 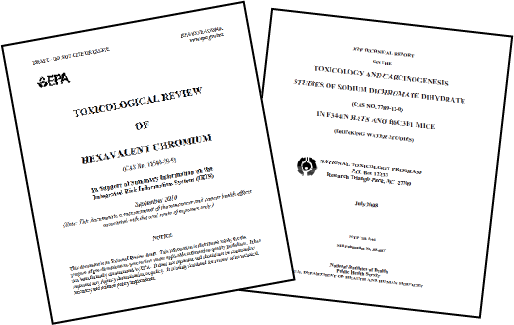 More recently, the National Toxicology Program (NTP) completed a cancer bioassay where hexavalent chromium [Cr(VI)] was administered to B6C3F1 mice and F344/N rats in drinking water for two years (NTP, 2008). There was no effect on mortality and no sign of early tumor formation. At the end of the 2-year study, carcinogenic effects observed included tumors in the small intestines of mice and in the oral mucosa of rats. The NTP cancer bioassay focused on hazard identification, and less attention was paid to the mechanism by which the tumors arose. Another challenge to interpreting the NTP study is the Cr(VI) concentrations used in the NTP study which far exceed typical environmental exposures, such as drinking water. The Cr(VI) MOA Research Study was therefore designed to investigate the underlying mechanism leading to carcinogenesis.